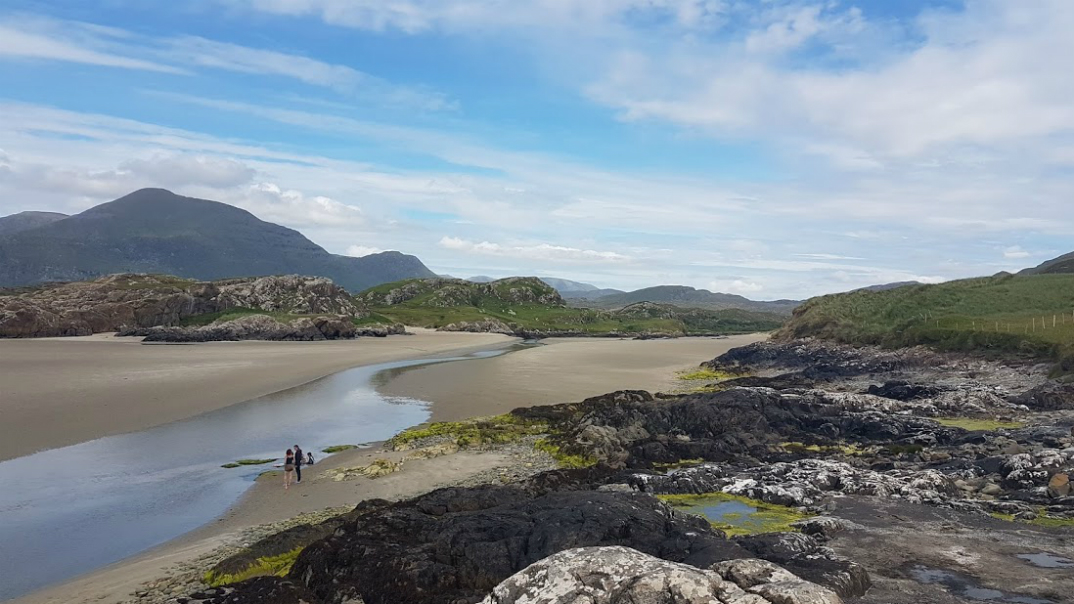 Magnificent camping on the edge of nowhere

Did that really happen? Looking back on the photos from our trip to Lettergesh this summer and honestly I’m pinching myself. We had such a brilliant, action-packed few days, but I don’t think it hit me at the time how utterly gorgeous the place is. We were a few weeks out west by the time we landed at Lettergesh and in hindsight must have acclimatised to the visual awesomeness of Connemara.

In fact I remember being a little disappointed on arrival. We were a large group of families with a gaggle of kids, so had booked well in advance. I called en route, the owner was off-site, so she told us to just go ahead in and our pitches were reserved on the right. The site is a small, mostly flat, grassy field with an incline at the end, the beach being just over the brow of the hill, so you can’t actually see it from the pitches. It had been overcast all day and was just starting to drizzle as boots were opened and equipment dragged out. The communal mood was a shade gloomy, until someone suggested a quick swim before putting up the tents. What an excellent idea that turned out to be! We grabbed togs and towels, ran up the hill, down the steps, peeled off and fell in to the tepid Atlantic waves.

And boy what a beach! This is ocean swimming the way I like it – all the vastness with none of the scariness. The large inhabited islands of Inishbofin and Inishturk surface in the distance with smaller ones dotted closer to shore, so you’re actually quite sheltered from the roar of the Atlantic. We could hardly believe it when we spotted some dolphins frolicking in the waves about 50 metres out. The tide was in that first evening but when it’s out you can walk for miles along the flat golden sand.

That glorious first dip in the rain set the tone for the three days we would spend at Lettergesh, which was a mixed bag weather-wise. In the west of Ireland, four seasons in one day is par-for-the-course, but thankfully Connemara is equally if not MORE stunning shrouded in mist as bathed in sunshine. Forget checking the forecast, you just have to take what you get, embrace the clouds and kiss the rain. Even when it’s gloomy it looks colder than it actually is, and a sunny spell is always around the corner.

Connemara camping and caravan park at Lettergesh beach is on the Connemara Loop about 20 minutes drive from Leenaun, on the Renvyle peninsula in north County Galway. The nearest restaurant and pub is in Tully’s Cross, 8 minutes drive. Clifden is a half hour drive.

So if it’s beautiful and isolated you’re after, with a dash of windswept and a dollop of extremely laid-back, Lettergesh is your man. It’s the closest we’ve gotten to wild camping in Ireland while on an actual official camp site. Located just west of Connemara National Park and the glorious Twelve Bens peaks, you are literally surrounded by a panorama of mountains and sea, with magnificence in every direction.

Ideal for families and groups

For such a basic camp site they had a massive and really well kitted-out communal games room with table football, pool table and a small ball park for the littlest ones. They are obviously open to groups as they took our booking – 6 families with 2 /3 children apiece. This place is so off-the-beaten-path it’s hard to imagine it ever getting too busy. We were there during the school holidays on a July weekend and there were only 3 other families. I have heard though that bank holidays can get hectic, so maybe avoid it at those super peak times.

The no frills campers kitchen has a cooker, kettle and sink; no fridge though, but there’s plenty of space and sockets if you wanted to plug in an electric cooler. They also have a coin-operated washing machine and dryer.

The holy grail.  And consistently hot. Yay! no messing around with tokens. I’m not against paying for showers at all, but it is a pain having to remember to get tokens in advance, estimating how many the whole family will need, rooting around in your wallet in soggy togs etc etc. The fact that easy hot showers were on tap certainly made jumping in the sea at the drop of a hat a lot more attractive.

For supplies, there’s a Gala shop for basics just past Tully Cross (10 min drive) or for a bigger shop, the Country shop, Letterfrack (14 mins drive) has almost everything and stocks locally grown and artisan produce. There’s a mobile fish shop parked in Tully Cross and Letterfrack on different days – ask anyone locally for its schedule. Clifden is the main town in the area with a Supervalu, bakeries, butchers etc.

You might feel like you’re in the middle of nowhere in Lettergesh but one of the best pubs in the country is right on your doorstep. The much beloved Paddy Coynes in Tully Cross has an open fire, warm atmo, smashing seafood menu and great Guinness. I’m almost afraid to say it as Coynes is so revered, but I think the Angler’s Rest next door, although not as cosy, served an even better pint of Guinness! Good kids menu here and a pool table. If it’s open, the Misunderstood Heron food truck overlooking Killary Harbour is an absolue MUST!! Serves gorgeous coffee cakes and snacks. Letterfrack has a few pubs and restuarants, there’s a tea room at Kylemore Abbey or head to Renvyle House, a gorgeous tranquil country house, and eat in the bar. Clifden is the main hub for restaurants and has a wealth of options.

Top 5 Things to Do

Day trip to Inishbofin. Book ferry here.
Visit Glassilaun beach, a gorgeous crescent-shaped beach with excellent snorkelling, a short walk or 5 minute drive from Lettergesh
Killary Fjord and a coffee at the Misunderstood Heron.
Seafood and a pint at Paddy Coynes.
The stunning Leenaun to Louisburg drive.